Learning musical intervals is easy if you know some simple tricks. Here you will learn how to identify and understand simple intervals. Learning to quickly identify intervals will help you when playing and reading music and when learning music theory. If we play intervals one note after the other; it is called a melodic interval (like a melody).

Or if the notes are played at the same time (creating harmony), it is called a harmonic interval. 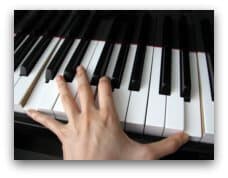 An Interval can be described in two ways:

Step one; you need to identify the number or how many steps there are from one note to the next (this is what we'll learn here).

Step two is to identify the quality. (This will be covered in the next lesson.)

Measuring the distance from one note to the next is very easy. Simply count!

Notice that when you have an Octave, the notes are the same; in this case a C and a C.

These intervals, reaching up to an octave, are called Simple Intervals because they are (duh) simple! :)

Larger intervals after the octave are logically called a ninth, tenth, eleventh, and so on. But we can also observe that the larger intervals repeat in the same order as above, just with the added octave.

How to Quickly Figure Out Musical Intervals

There is a little trick to learning how to quickly identify and remember musical intervals:

One interval you can quickly learn without counting is the Unison since it is so easy to spot (two notes that are the same):

Did you notice that one note in the interval is a line note, and the other is a space note? They have an "uneven" look. But the numbers? They are even! (2,4,6,8)

See, it's pretty easy to identify each interval without counting!

See how both notes are either space-space or line-line in each of these intervals?

Now you see how easy it was to understand the basic, simple intervals.

Be the first to know what's new at OnlinePianoCoach.com by subscribing to our monthly newsletter, The Piano Player!