Here is a list of the most famous piano performers of classical music of the 20th and 21st centuries. You will also be able to view some rare recordings and videos of the greatest classical pianists.

Enjoy their style, their expression and study their technique. All these famous pianists have left us with a treasure of performances to be inspired by! 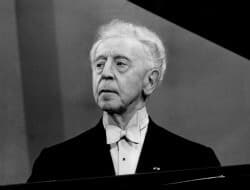 Let's face it, it would be impossible to mention every brilliant and celebrated pianist that ever existed.

But here is a list of some of the most famous and brilliant pianists during the 20th and 21st centuries.

The list below is organized in chronological order, with active pianists in the end.

Tip: Double-click on a name, right-click and select "search for" (the famous piano performer's name). In this way, you can easily find out more about each individual performer! Bring out the popcorn, sit comfortably, and put on your headphones for this outstanding video:

The Art Of Piano: Great Pianists of the 20th Century.

This video is a must-see for all pianists. Be amazed and inspired!